Valentine’s Day: Where it all began for Lois, Jean, Karen and Allon

“The story begins in 1966, in room 20 at the Fondation des États-Unis. Back in that era before cell phones and messaging apps, a ground-floor corner room facing the garden made it particularly convenient for Lois, recently arrived from Pittsburgh on a Fulbright scholarship, to communicate with a French student named Jean staying at the Maison du Japon. 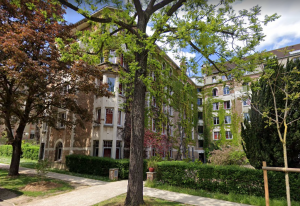 The north wing of the Fondation des Etats-Unis where we can see the ground-floor room 20.

Well…to be honest, it started at the cafeteria in the Maison internationale. The French student was pushing his tray in the service line.  The American just behind him, overwhelmed by the diverse concoctions on display, accidentally rammed her tray into his.  “Choo, choo!  We’re a train!” he said, always ready with a joke for any occasion.  She had just arrived from the US that morning, and this was her first meal in Paris.

She spent only two weeks at the Fondation for an orientation program, before leaving for the University of Caen. Ground-floor window visits were now replaced by letters in the mail and alternating weekend trips to Caen and Paris. 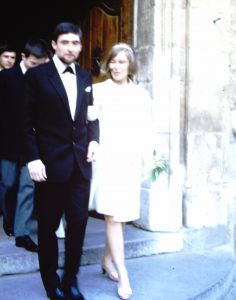 But the story does not end here…

“Fast forward to 1993.  Karen, a PhD student in art history who has just finished her maîtrise in Lille, is thrilled to arrive at the Fondation des États-Unis, though is blissfully unaware of its importance in the French-American family heritage.  Her room is almost exactly two floors above where her mother had stayed.

Upon her arrival, Karen had made an appointment with a gynecologist at the Hôpital international down the street. Looking at her file, the doctor asks: “Mais ne vous ai-je pas déjà vue quelque part, mademoiselle?” Seeing Karen’s puzzled expression, he points to the boulevard Jourdan address listed under “lieu de naissance” in her carnet de santé, and remarks that he surely must have been on duty in the delivery room two decades earlier.  The week of her birth had been a memorable one.  The US military bombed Cambodia.  The French military contented itself with picking up mounds of trash on the streets of Paris that striking garbage collectors refused to collect.  Papa Jean, now deprived of his cafeteria tray locomotive, was stuck in traffic on boulevard Jourdan behind a procession of army vehicles while trying to reach the hospital in time for the birth.  Punctuality was never Jean’s greatest strength.  This occasion turned out to be no exception.

That same fall weekend in 1993, a young American who was starting a PhD in theoretical physics moved into the FEU.  Allon soon became active in the Residents’ Committee activities, setting him on a direct collision course with Karen when he would regularly remove her treasured piano from the practice room to set it up for Saturday night piano-bar events.  Despite the tough negotiations on when to return the piano and how to repair the piano keys that invariably came back broken, they did find some things in common.  For instance, a shared interest in the German language motivated them to organize a German-speaking table together at the Resto U.

Karen’s doctoral research took her to Florence during much of Allon’s time at the Fondation, and they did not see much of each other.  But they reconsidered this situation once Allon completed his PhD in 1997 and started working at Los Alamos National Laboratory in New Mexico. So Karen decided that of course the American southwest was the optimal place to finish a dissertation in Renaissance Italian art.  And when she completed her PhD and started working at a research institute in Los Angeles, Allon decided that of course Southern California was the optimal place for him.

Karen and Allon were married in 2000, in Southern France where Karen’s grandmother lived.  And, yes, in the photo below, you may feel free to ask the doorway: “ne vous ai-je pas déjà vu quelque part?” 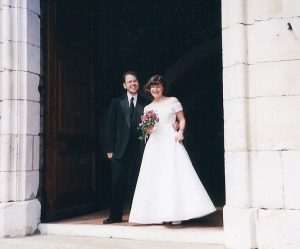 Karen and Allon’s own children are now in middle school and high school.  One day not too far in the future, these French-Americans from California may find themselves in need of student housing in Paris.  When that happens…there are some family expectations.  No pressure, of course.”

Excerpt from a letter sent by Jean and Lois recalling their family history that began at the Foundation of the United States.

Community Garden at the FEU