This Valentine’s Day, discover the unique love story of Asa Paul Ruskin and Francine Klein Ruskin, former residents of the Fondation des États-Unis, as told by their children, Adina and Philip Ruskin.

The young American medical student stops abruptly in front of the glass paneled door that leads into the study room. He is carrying a few books but hasn’t quite decided whether to study now or not, when he notices   a young woman engrossed in her books. She shifts her gaze, and he is struck by her slightly almond eyes, jet black hair and porcelain complexion. She does not look up as he enters the room with its four simple wooden tables and a few scattered chairs. The space is sparse, yet delicately elegant, it resembles a sunroom from a minor chateau with its detailed moldings, rather than a study room. He lets his fingers drift across the solid oak table closest to him. Looking at its veins and scars. The young lady studying ignores him. 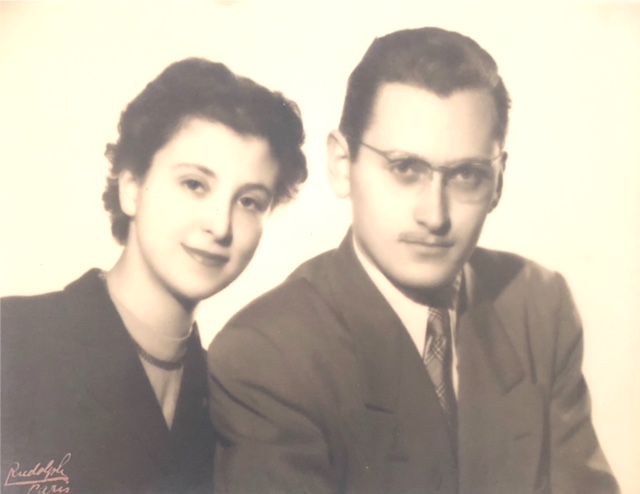 Asa Paul Ruskin was a 22-year-old medical student from New York City. Dapper, outgoing, and used to being noticed. He tries to start up a conversation with the lovely student. They were the only two in the room. Francine Klein, a psychology student from Buenos Aires, was there to study, she picked up her books and moved to a different table. He tried again. He was persistent. Dad will claim years later that it was love at first sight. At least for him.
“There are only four tables.” He says with a sweeping gesture. Showing me where he first met Mom so many years ago.
“What happened next?” I nudge him though I know the story well. Hearing it here, where it happened, is enthralling.
“She agreed to have coffee with me after her exams if I would just leave her alone to study.” We both burst out laughing. Happy to be here at the Fondation des États-Unis at the Cité internationale universitaire de Paris in 1986.

Francine was always the better student. After that coffee she decided he wasn’t so bad, and one date led to another. After class meeting at the Pâtisserie Viennoise for the famous hot chocolate, a romantic stroll in the Jardin des Plantes, or a movie at Le Champo. One short year later as they sat in the library, Asa said, “I am writing a letter to my parents. When shall I tell them we are getting married? This year or next?” She replied, “This year.” Our brother Marc was born a year later in 1954. My brother Philip a few years after.

Francine and Asa on their
wedding day in 1954

Every great love story starts somewhere and for our parents it was here. Our mother was a French- Argentine psychology student at the Sorbonne. In the early 1950’s to live at the Argentine house you had to be a member of the Peronist party. Francine did not want to do this. One day she ran into an acquaintance from Buenos Aries, Guida Kagel who was renting a room at the American house. Guida gushed about how much she loved it there and that she was looking to find a roommate.

Philip and I are standing in this room reminiscing. Phil has recently moved to back to France, and I am visiting to research a book I am writing about the day I spent walking thru the city of Paris with our Father when I moved here at 23. We are captivated by the beauty of this room and all it means to our family. It occurs to us, that if not for this study room at the Fondation, well, we might not exist. Thank you to the Fondation for being the birthplace of our family. In 1958 Francine and Asa moved to New York City where they both continued their respective careers, six years later they had me, their daughter, Adina.

Dr. Francine Klein Ruskin began her career in NYC at the famous Northside Center For Child Development under the world renowned Doctors Kenneth and Mamie Clark in Harlem, New York City. She then decided to continue her education and receive her Doctorate in Education from Columbia University’s Teachers College in Family and Communication. She went on to found and direct The Hispanic division of The Metropolitan Center for Mental Health, The largest of its kind in New York City employing over 40 Hispanic mental health practitioners. There she continued working as a Psychotherapist as well as recruiting and training a generation of young therapists for whom she served as a mentor. 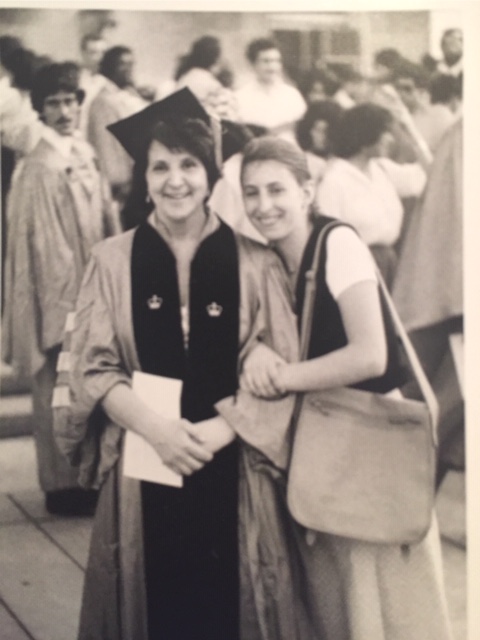 Dr. Asa Paul Ruskin was an innovative Neurologist and Physiatrist. He was a champion for the rights of persons with disabilities, speaking before the U.S. Congress to get ramps for all public buildings!  Asa edited the definitive textbook on Physical Medicine (Physiatry) used in American Medical schools. He was an adjunct professor at John Hopkins and the director of Physical Medicine at Kingsbrook Jewish Medical Hospital, where he was instrumental in the development of a new building dedicated to Rehabilitation, which he ran for the last 16 years of his life. He was a regular contributor to The New Times with his poignant and political letters to The Editor. He served as an Honorary Police Surgeon for the City of New York.  Of his many diplomas and awards, he was perhaps most proud of being named Chevalier dans l’Ordre des Palmes Academic, (Knight of Academic Palms) one of the most esteemed honorifics of France.

Asa and Francine had a gusto for life, family, friends and travel. In his 40’s Asa became a pilot of small planes and would often fly the boys back to college after a weekend visit. In his 50’s he started singing lessons inspired by their mutual love of Opera. Francine was world famous for her loving, lively and international dinner parties. Most importantly they were both great parents.

Partnership with the EAAF