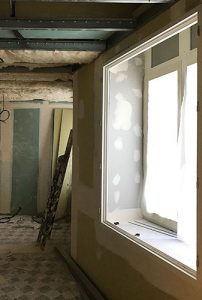 Two music studios are being created on the lower ground floor of the Fondation des Etats-Unis. These have been specifically designed to ensure good sound insulation for the musicians, but first and foremost for other residents who may or may not enjoy being entertained!

A room within a room

In an effort to improve temperature insulation, all the rooms in the new East wing have had their facade walls doubled, with insulation inserted between the exterior wall and the interior wall. In the case of music studios, the idea is similar, but in a much more radical way. It is practically a room within a room. The walls of the two interlocking rooms are 20 cm apart, the vacant space being filled with mineral wool. The ceiling is treated in the same way and a new window is installed in front of the one overlooking boulevard Jourdan. The walls will then be covered with specific panes to further improve the acoustic quality of the studio. To avoid sound moving through the floor, it was sawn all around the room. Small trenches prevent the sound vibrating beyond the studio.

The frame of the new window is visible in front of the old one, as well as the thickness of the new wall. On the ceiling, support beams have been installed and are being filled with mineral wool before “closing off” the ceiling.

Sound panels are used to cover the interior walls of the studios. They are made of spruce wood wool and cement, combined with rock wool. The cellular structure of the wood and the irregular mesh of the fibres guarantee lightness, flexibility and sound absorption, while the cement ensures its resistance to impact, humidity and frost. Despite its strange texture, rock wool is a natural material! It is made from basalt, a black volcanic rock found in many parts of the world.

The two new studios will be able to accommodate musicians as individuals or groups. The small studio covers just over 14 square meters (150 sq ft) while the large one is almost 25 square meters (270 sq ft). The two studios are separated by 30 centimeters (12 inches) also filled with wool. The Foundation welcomes all styles of music but above all, allows them to coexist in peace!

On the left are the plasterboards that will be used to create the “room within the room”. 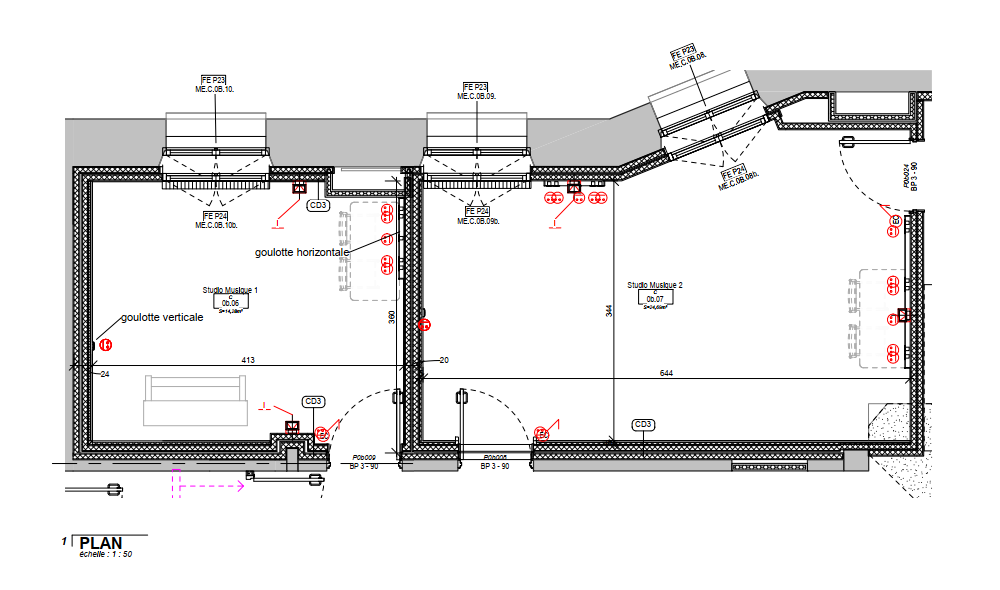