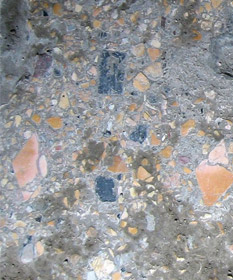 Terrazzo is a very common coating material at the Fondation des Etats-Unis, which is not surprising since its use was common in Art Deco architecture. The 1920s and 1930s were a golden age for terrazzo, especially for floors and stairs, but its use dates back to antiquity. It went in and out of fashion throughout history and today, once again, it is a hot topic in trendy home design magazines.

What is terrazzo? It is a coating material composed of fragments of natural stone or colored marble agglomerated with cement. Once dried, the composite is polished to give it a smooth and sometimes even shiny appearance. The size and color of the stone or marble fragments and the possibility of dyeing the cement make for an infinite number of possibilities. It is solid material that will last forever. It has been used extensively in Italy and particularly in Venice due to its stability in wet environments. The floor of the boardroom of the Doges’ Palace is a good example: 800 years old and as beautiful as ever!
On the left, the terrazzo floor in Herculaneum, dating back to before the eruption of Mount Vesuvius in 79 AD.

The Grand Council Chamber of the Doge’s Palace and its 1300 m2 of terrazzo floor space.

Terrazzo or granite? Granite and Terrazzo tend to be used interchangeably, but they are not quite the same. They both describe a cement covering and fragments of stone or polished marble, but made differently. Terrazzo requires two castings – a first layer of cement and the finest aggregates is cast, followed by the coarser (larger than 5mm) aggregates, which are rolled and crushed to ba cast into the first layer while it is still fresh. Granite requires only the first step where a thin layer is cast directly onto the structural support without the coarser grains. The FEU’s “terrazzo” is actually Granite!

Terrazzo at the FEU, past and future The most immediately visible terrazzo is in the stairs. It is in perfect condition and requires no renovation work. On the other hand, a terrazzo that was kept for many years is now invisible, having covered by many layers of paint: it was on the walls of the Rectangle, in the basement, and was about 5 feet 6 inches high. 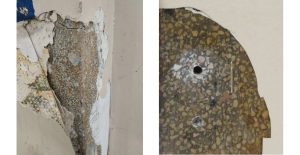 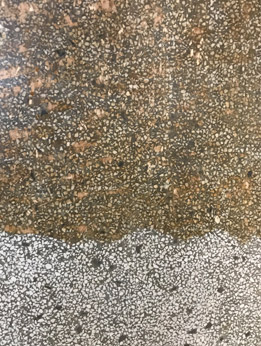 East Side Story is a project that launches the house into a new, more modern, more comfortable era. But never at the expense of its architectural uniqueness. Thus, the terrazzo on the walls and pillars in the basement has been made visible to everyone – it was hosed down, stripped of its fiberglass, and carefully sanded. Because it was somewhat damaged in places with holes made over time to attach all kinds of things, terrazzo scraps were reused from spots that won’t show. They were crushed and mixed with cement to fill the holes. After more sanding, a transparent matt varnish is applied.
On the right, a pillar of the basement partly sanded of its old varnish, yellowed and tarnished by time. The original colors come to light! 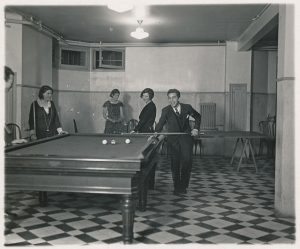 Students playing pool in 1930. You can see the terrazzo on the pillars.

Renovations are Full of Surprises