East Side Story – What Now, What Next? 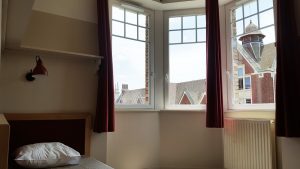 East Side Story is the story of 69 classic rooms in the East wing of the FEU becoming 67 comfort rooms, and creating one accessible comfort room, studio, and kitchen. The basement was entirely renovated to create a large classroom space, a multi-purpose room, a lounge with a TV corner and kitchen, two beautiful music studios, storage for the culture office, storage for the Residents’ Committee, and handicap-accessible restrooms, which were desperately needed for those evenings spent in the lounge. Concerning sustainability, the renovations provided the opportunity to install a waste water heat recovery system in the renovated wing. The waterproofing of the roof terraces has been reinforced for greater thermal efficiency and photovoltaic panels on both the east and west sides of the house now generate electricity directly used by the building.

Beyond the East wing, the former computer room on the ground floor of the West wing was converted into a handicap-accessible comfort room, and six large rooms of the central wing on the 3rd and 4th floors were transformed into studio apartments. The shared restrooms just next to them were also entirely renovated. The staff rooms were moved to the west side of the building in the basement where the former large storage space resided.

As its name may suggest, Easy Side Story is only a third of a house whose renovations never cease, and we can’t help but rejoice. There is no shortage of future projects: follow us for new episodes in the West wing, where we are currently renovating 10 rooms, on the 5th floor for the project “Sous les toits du monde” (Under the roof of the world), or on the facade where restoration is planned. 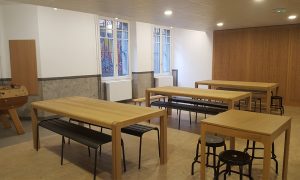 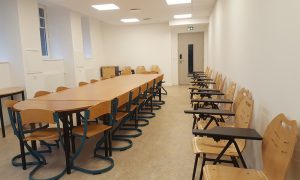