For this year’s Jazz à la Cité festival, the FEU is pleased to collaborate with pianist Daniel Gassin, who has performed in the Grand Salon with several different jazz ensembles over the years. In keeping with our theme for the month of October, Women in Jazz, Daniel is bringing jazz singer Sara Lazarus to the FEU on Tuesday, October 15th. After the concert, the audience will be invited to the gallery to see the exhibition La Couleur du Jazz by artist Erwann Gauthier, which is being hosted by the FEU and the Maison des Arts & Métiers throughout the month of October. At the FEU we will show fifteen portraits of women from the jazz world. 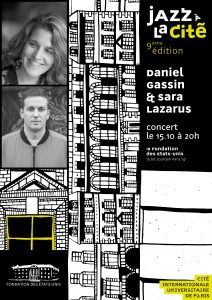 Daniel Gassin is an Australian pianist of French-American descent, currently living in Paris. In 2007 Daniel reached the finals of the Jazz Solo Piano Competition at the iconic Montreux Jazz Festival. In 2008 he was selected to participate in the Jazz & Creative Music Workshop in Banff, Canada, headed by acclaimed U.S. trumpeter and composer Dave Douglas.  In the same year, the Daniel Gassin Trio released its second album Crossover which was recorded by and for the national radio program ABC Jazztrack. In 2010, the Daniel Gassin Trio performed at the Dubai International Jazz Festival, as well as the Queenstown International Jazz Festival. In 2011 Daniel made his debut as leader at the Wangaratta International Jazz Festival with his newly-formed Sextet.  In July of that year, the Daniel Gassin Sextet’s debut album, featuring all original compositions, was released to critical acclaim and widespread national airplay.  The album was nominated for Best Jazz Album at the Independent Music (AIR) Awards, and the track “Banff Song” earned a nomination at the 2012 Jazz Bell Awards for Best Australian Jazz Song of the Year. In 2013, Daniel reached the final of the National Jazz Awards, and was awarded Third Prize. In 2016, he was nominated for the prestigious Freedman Fellowship, and completed a five-concert tour of Sweden with his Trio.  In November of the same year, he became the first pianist to perform at Quincy Jones’ new jazz club – Q’s – at the Palazzo Versace Hotel in Dubai, inaugurating the venue as part of UK drummer Ollie Howell’s band over its opening two weeks, and returning for a further three-week stint in 2017. Since moving to Paris, Daniel has toured extensively both abroad (Burkina Faso, Angola, Mauritius, Seychelles, United Arab Emirates, Sweden, Serbia, Guadeloupe, Italy, England) and throughout France.  He is also an in-demand sideman in numerous projects including Grammy Award-winning trumpeter/guitarist Josiah Woodson’s Quintessential (he also appears on the band’s debut album) and JWP, Trumpeter Rachel Therrien’s Quartet (appearing on her recently recorded debut album), and vocalist Alita Moses’ European ensemble. In addition to playing and touring extensively with many of Australia’s (and now France’s) finest jazz musicians, Daniel has also performed and recorded with U.S. jazz greats Dave Liebman, George Garzone, Leroy Jones, Rick Margitza, John Riley and Bob Sheppard. Daniel’s debut EP with his new Crossover Band will be released in October. Daniel Gassin is a Yamaha artist. Follow him on Facebook and Instagram!

Born on April 1st In Wilmington, Delaware, Sara Lazarus started singing at an early age, imitating the singers she heard on her mother’s record collection of Broadway musicals.  After several years of classical piano lessons, she switched to saxophone in order to play in the school band.  By 16, she was singing and playing tenor saxophone with the American Youth Jazz Band and went on a European tour that culminated in an appearance at the Montreux Jazz Festival. While studying English literature at Harvard University, Ms. Lazarus continued playing and singing jazz and studied briefly with Harvard Artist in Residence, Illinois Jacquet.  He encouraged her to become a professional jazz artist and invited her to perform with his big band during a European tour.  At the end of her final year at Harvard, she won the DOWNBEAT student music award for “Best Jazz Vocal Soloist—college division. Immediately after graduation, Sara moved to Paris and began working steadily in various club and concert settings.  She  worked with pianists Jacky Terrasson, Alain Jean-Marie; bassists Riccardo del Fra, Pierre Boussaguet; drummers Steve Williams, Sangoma Everett and performed at many  festivals including Jazz In Marciac, JVC Paris Jazz Festival, Vienne and the Red Sea Jazz Festival. In 1994, Miss Lazarus was awarded first prize in  the prestigious  Thelonious Monk International Jazz Vocal Competition.  Her first solo Cd, GIVE ME THE SIMPLE LIFE (Dreyfus Jazz) was released to rave reviews.  She was nominated for the French “Victoires de Jazz” and toured extensively throughout France. Her most recent Cd, IT S ALL RIGHT WITH ME (also on Dreyfus Jazz)  finds Miss Lazarus in the company of the phenomenal French gypsy guitarist Bireli Lagrene.  Highlighting Sara’s hard swinging phrasing and  multi-colored voice, this second album has established her as one of today’s outstanding jazz vocal artists. Follow her on Facebook!