Beethoven at the Fondation des Etats-Unis: A Spin-Off Questionnaire by Leo Marillier

The FEU is delighted to present a conference created and produced by Leo Marillier, former resident, filmed in the Grand Salon. The conference will be released on December 16th, 2020, the date of Beethoven’s 250th birthday. Also discover the series of three docufilms by following this link.

“After finishing a research thesis at the Conservatory of La Haye this year, I became well acquainted with Beethoven after studying his letters, manuscripts, and drafts. At the same time, the technological necessities imposed by the pandemic made me more at ease talking in front of a camera, as well as using visual and audio tools. I decided to combine my newly acquired knowledge to create a series of docufilms, which consist of three conferences about how Beethoven’s deafness affected his private and artistic life. The project is called Volti Subito. In addition, with my string quartet, the Joyce Quartet, one of our goals is to explore creative nooks and crannies previously unexplored in chamber music. To be continued…” 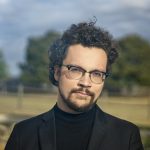 Léo Marillier, « a poetic and fire-taming violin playing », 25, awarded with the highest honors for his Masters and Graduate Diploma at New England Conservatory in Boston in Miriam Fried’s class, has acquired in 2019 an Artist Diploma at the Paris CNSM specialized in 20th and 21th century performance and has recently brilliantly finished a thesis on Beethoven at the Royal Conservatory in the Hague as part of a second Masters, in research and performance. Awarded by several competitions including the Tchaikovsky competition for young musicians in Seoul and being the first French to have won first prize at the Dvarionas competitions, Leo is laureate of the Société Générale, the Fondation Florence Gould, the Fondation de France, the Fondation des Etats-Unis, and the Cité des Arts. As soloist and chamber player, remarkable, leading him to join the Diotima Quartet in remplacement of Constance Ronzatti for a Bartok cycle, Berg, Schubert, Beethoven during two international tours in Colombia, UAE, and Europe. Invited as soloist at 13 by the Wiener Konzertverein, Leo performs the great concerti under conductors such as Manuel Nawri, Benjamin Zander, Pierre Roullier, or Thomas Rösner, performing along the LOH orchestra, l’Orchestre Inter-Universitaire de Paris, Danish Young Orchestra, le LOH Orchestra, le Klaipeda Chamber Orchestra, A-letheia, le Paris-Berlin Orchestra, giving in 2018 in Berlin the première of Eun-Hwa Cho’s concerto « Jouissance de la différence V » and performing the Kurt Weill concerto under Philippe Aïche with the Laureates’ Orchestra of the CNSM of Paris. « A boundless curiosity and a musical imagination capable of leaving the tight spaces of his instrument, a refusal of the ephemereal comfort provided by his exceptionnal gifts. Leo has no limits », such was the cast his mentor Alexis Galpérine saw in him, as soon as he entered the Paris CNSM age 15, cast on which Leo built his engagements : creating the A-letheia ensemble, the Joyce Quartet, composer and arranger edited by Delatour since 2015, contributor at Jobert, artistic director of Festival Inventio (including concerts available online here), he joins the Ensemble Cairn, and is instrumental in bettering violin teaching in Madagascar. Fascinated by the blending of music and the world, as much as by acoustics or research, he works regularly with Ensemble Intercontemporain, 2e2m, les Cris de Paris, and composers such as Alain Bancquart, Clara Iannotta, Eun-Hwa Cho, Oscar Bianchi, Martin Matalon, Florence Baschet, Bernard Cavanna. Discover : his recording of the Beethoven concerto (in his own version according the manuscripts held in Vienna), edited at VDE Gallo/Cascavelle. Leo plays depending in the repertoire a Nicolas Lupot of 1811 on anonymous loan or a violin made in 2016 in Milan by his sister Juliette Marillier. Leo is invited to the Biennale de Venise in 2020 and by the French May Festival in Hong-Kong in 2021.